We Can Work it out: Younger and Older Persons in the Workforce

Should retirement be compulsory at 65 years of age?  A significant majority of the population takes a negative view of employees who continue working past retirement age. Indeed, notwithstanding economic evidence, the perception persists  that workers who remain in the workforce past age 65 are pilfering jobs from the young (O’Donnell,  2013, para. 2; Sedensky, 2014, para. 1; Worstall, 2015, para. 1). 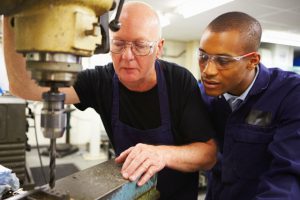 However, most economists cite current research to argue that workers who remain in their jobs rather than retire benefit the entire economy.  For example, a 2012 issue brief published by the Pew Charitable Trust concluded that Boomers’ greater presence in the labor force has no negative impact on young workers. Moreover, working past retirement age correlates with increased employment, decreased unemployment, and higher wages for young workers (p. 4).

What then, explains the persistent impression among the general public that retirement at age 65 should be encouraged to improve employment prospects for youth? First, one must examine the “lump of labor” theory, based on the concept that there are a fixed number of jobs for which different groups, in this case younger and older workers, compete. (O’Donnell, para. 3; Pew Charitable Trust, p. 1;  Sedensky, para. 4; Worstall, para. 1). Although this theory makes intuitive sense, it is a proven fallacy based on the assumption that, since the amount of work is fixed, hiring one individual deprives another of his or her job. Contrary to popular wisdom, Worstall explains that it is the aggregate demand for services rather than a set quantity of jobs that drives the economy. Increased employment means more money to pay others for desired services, that is, more people in the job market create greater job opportunities for others (para. 5-7).